The Human Microbiota present in the body

Trillions of microorganisms habit the human body. Bacteria, fungi, viruses and archaea that are part of the human microbiota colonize the skin, the gastrointestinal tract, the airway tract, the sexual organs, and the eyes. The microbiota plays a crucial role in human body for the synergic functions in metabolic homeostasis, immunology and endocrine functions. in vitro Culturing

On 2007, the National Institute of Health has launched the Human Microbiome Project (HMP) with the aim of study the microbial flora in human in health and disease states, starting from the microbioma (the genoma of the microorganisms). In fact, nowadays, the advances in the next-generation sequencing and in bioinformatic database have revealed the presence of different microorganisms that habit the human body. The HMP has studied the microbioma in skin, urogenital tract, oral mucosa, and nasal mucosa [1]. An emergent interest in ocular surface microbiota and the effect of gut microbiota in eye and brain has lead on new research field and new clinical investigations[2]. in vitro Culturing

The skin flora or skin microbiota counts commensal or mutualistic bacteria from 19 phyla, counting around of 1000 species[3](Figure 1). The oral, upper digestive, and upper respiratory tract microbioma sequences can be found in the human oral microbioma database and its extension (HOMD and eHOMD). These repositories created by the HMP contains information of about 772 procaryotic species, of which just the 30% is uncultivable and just the 57% of the remaining 70% has been assigned to a known species[4]. 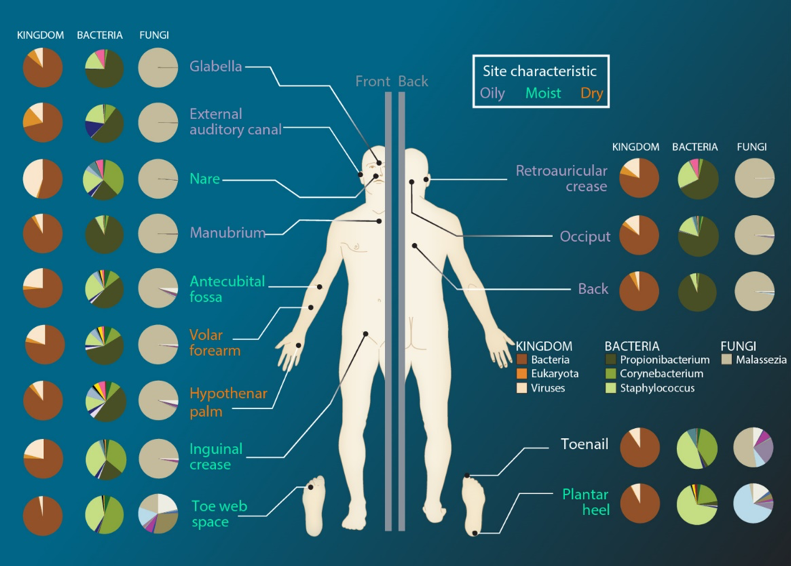 The figure 1 shows the bacteria distribution in different areas of the human skin. CC By Darryl Leja, NHGRI.

The Human Microbiota in diseases

Understanding the role of the trillions of bacteria, viruses, and fungi that comprise the human microbiota is critical to understand a variety of human pathophysiologies. Dysbiosis of the skin microbiota had been associated to atopic dermatitis, rosacea, psoriasis, and acne. In the oral mucosa the biofilm produced by the bacteria form the dental plaque which can turn into tartar and lead to gingivitis or periodontal diseases. Vaginal flora alterations are associated with inflammations, bacterial vaginosis, and yeast infections. In the lung diseases, the changes of the commensal bacteria are associated to the progression of chronic obstructive pulmonary disease, asthma, and cystic fibrosis. In the eye, the use of contact lenses and the general exposure to atmospheric agents and pollutions, the alteration of microbiota is associated with corneal infiltrative events, blepharitis, endoophtalmitis, and infection-associated ocular adnexal neoplasm. The gut microbiota has been implicated in several inflammatory and autoimmune diseases, not only in the intestine but also in other organs [5]–[8]. in vitro Culturing

Historically, microbiology discoveries had been made thanks to the microscope: the first record of a bacterial cell is in 1663 by Antonie Leeuwenhoek. Classification and advances in the microbiology has been focused in instrumental laboratory microscopy, until Robert Koch postulated the importance of culture media in the 1880s generating the shift in cultured and uncultured bacteria. Many different media had been used to improve the possibility to study bacteria in vitro. The food industry demonstrated that the environmental conditions including extreme high and low temperature and pressure are not suitable for living microorganisms. Recently, advances in the technology related to DNA isolation and direct isolation of genomic DNA with next-generation sequencing has led to new discoveries in the microbiology [9]. However, the next steps will focus on finding new methods to cultivate the microbiota based on the optimal temperature and pressure condition in fluidic microchips.
Discover CubiX and our project related to the microbiota study: GoC-MM and GROWTH. in vitro Culturing

Liver on a chip state of the art