Fundamental aspects of adipose physiology can be studied using in vitro adipose tissue models. Animal models, which are often poor predictors of obesity and metabolic diseases in humans, may be replaced by these systems.

The rich vasculature of adipose tissue is necessary for its function. However, due to the differences in culture conditions required for the survival and function of each cell type, studying endothelial cell–adipocyte interactions has proven difficult. To address this problem, the author investigated the composition of cell culture media to determine the best conditions for co-culturing endothelial cells and adipocytes. Human Vascularized Adipose Tissue Model

Individual media factors’ effects on cell survival, proliferation, and differentiation were studied in depth. The co-culture system has been found to be disrupted by a number of media factors.

The optimal culture conditions for generating a vascularized human adipose microtissue were discovered and used. Within an adipose microtissue, an interconnected vascular network was established, and the networks were anastomosed with perfused channels to form a functional network.

Finally, media conditions for endothelial cell–adipocyte co-culture were identified, and they were used to support the formation of vascularized adipose tissue within a microfluidic device.

Communication between endothelial cells and adipocytes is critical to adipose development and function. However, endothelial cell–adipocyte co-culture is challenging due to diﬃculties in identifying a single media condition that will support both cell types.

In this work, the media conditions were systematically investigated to determine the eﬀects of various media supplements on the behavior of each individual cell type. Endothelial cell culture media is supplemented with a variety of hormones and growth factors, including hEGF, hFGF-B, hydrocortisone, and VEGF.

Hydrocortisone and EGF resulted in a signiﬁcantly reduced lipid accumulation, consistent with a previous report in which they were shown to inhibit adipogenic diﬀerentiation and promote the de-diﬀerentiation of mature adipocytes. Stromal cells from human adipose tissue exposed to EGF showed a dose- and time-dependent inhibition of adipose cell diﬀerentiation. Adipocytes exposed to EGF also exhibit decreased levels of glycerol-3-phosphate dehydrogenase (GPDH), a marker of adipose diﬀerentiation, and an increased ﬁbroblast-like cell number. hFGF-B and VEGF in their studies did not inhibit lipid loading but increased proliferation.

Others have found that exogenous hFGF-B exerted an inhibitory eﬀect on the lipid droplet accumulation and gene expression of adipogenic markers, while VEGF regulates the balance between osteoblast and adipocyte diﬀerentiation by mediating the eﬀects of lamin A, a suppressor of adipogenesis. A broad range of adipogenic factors (insulin, T3, dexamethasone, rosiglitazone, and forskolin) were added to the co-culture media to support continued diﬀerentiation after the partially diﬀerentiated ADSCs were loaded into the microﬂuidic device. The combination of all factors was required to maintain diﬀerentiation. Insulin is one of the most widely used adipogenic factors and has been shown to be suﬃcient to continue adipogenic diﬀerentiation in other systems. Thyroid hormones act as pleiotropic factors by regulating the genes involved in diﬀerentiation in many tissues, and T3 has been shown to stimulate the adipogenic diﬀerentiation of 3T3-F442A cells. However, these factors alone did not sustain adipocyte diﬀerentiation in the 3D culture. Forskolin, dexamethasone, and rosiglitazone were also required. In their absence, lipid loading was decreased and the cells exhibited a ﬁbroblastic phenotype. Dexamethasone has multiple, depot-dependent eﬀects on adipocyte gene expression and metabolism that promote central fat deposition. Studies have shown that dexamethasone treatment stimulates the early accumulation of C/EBPβin primary human preadipocytes and downregulates Runx2, a transcription factor that promotes osteogenesis and inhibits adipogenesis. Thiazolidinediones (TZDs) are prescribed for the treatment of type 2 diabetes. Rosiglitazone, one of the TZDs, has been shown to stimulate adipogenesis and decrease osteoblastogenesis in human mesenchymal stem cells. Forskolin is a natural compound extracted from the roots of the Indian plant Coleus forskohlii. Forskolin has been clinically used for a variety of conditions, including glaucoma, asthma, and obesity. Similar to IBMX, forskolin increases cellular cAMP and has been shown to eﬀectively accelerate the adipogenic diﬀerentiation of 3T3-L1 preadipocytes. HUVECs were used to form vessel-like networks in a microﬂuidic system. Forin vitro vascularization, non-endothelial cells are often used as support cells. The support cells can provide support directly (cell–cell contact) or indirectly (the production of soluble factors). Communication between endothelial cells and supporting cells was found to be critical to avoiding network regression and maintaining a stable morphology. The co-culture of HUVECs with ADSCs, MSCs, andNHLFs has been explored and showed that angiogenesis is driven, in part, by the expression of growth factors by the support cells.

Human primary ﬁbroblasts have been shown to secrete a variety of growth factors when co-cultured with endothelial cells that can promote vessel formation, including VEGF. In the current study, ADSCs and NHLsF were tested for their ability to facilitate vessel formation when co-cultured with HUVECs. The group with NHLFs showed superior vessel network formation compared with ADSCs alone. In the optimized co-culture media, although several pro-angiogenic factors from the EGM-2 media were removed, the culture of HUVECs and NHLFs resulted in an interconnected vascular network within the microﬂuidic device. Some of the pro-adipogenic factors may also facilitate vessel formation. Thyroid hormones are considered strong pro-angiogenic factors. T3 directly stimulates angiogenesis by promoting endothelial cell proliferation, migration, and capillary network formation. Meanwhile, forskolin has been found to increase endothelial cell proliferation, migration, and tube formation by stimulating typical angiogenic signal events such as NO production and VEGF expression. IBMX was shown to be detrimental to HUVEC survival in this study. IBMX is a cAMP agonist that accelerates the adipogenic diﬀerentiation process. IBMX has been shown to be critical for the eﬃcient adipogenic diﬀerentiation of human ADSCs in vitro. However, the cAMP elevation induced by IBMX destabilizes endothelial adherens junctions and increases endothelial cell permeability. Exposure to IBMX signiﬁcantly inhibited HUVEC proliferation and disrupted vessel formation. In an eﬀort to circumvent this issue, researchers reported approaches to diﬀerentiate adipogenic cells separately at the beginning and later co-culture with endothelial cells. For example, a porous silk protein scaﬀold was seeded with HUVECs for 7 days, and then diﬀerentiated ADSCs were added for co-culture. In another study, ADSCs were embedded within collagen/alginate microspheres to mimic fat lobules, while HUVECs were later cultured on the surface of the microspheres to mimic micro-vessels in the adipose tissue. In the current study, while lipid accumulation was observed in 3D culture in the microﬂuidic chamber, the ﬁbrin gel exhibited deformation and degraded under these conditions. When ADSCs were pre-diﬀerentiated in 2D in the presence of IBMX prior to loading into a microﬂuidic chamber, the ADSCs de-diﬀerentiated into ﬁbroblast-like cells, leading to ﬁbrin deformation. However, the addition of forskolin to the media facilitated the continued diﬀerentiation of ADSC, while facilitating the assembly of vessel networks in this system.

With the goal of developing a procedure for engineering a vascularized adipose tissue model, co-culture conditions were systematically investigated to identify the potential confounding effects of media supplements on adipocyte differentiation and endothelial cell assembly. In this study, IBMX was found to be detrimental to HUVEC proliferation and vessel formation while also being required for maintaining a stable fibrin structure during human ADSC adipogenic differentiation. ADSCs were pre-differentiated in 2D before co-culturing with HUVECs and NHLFs to avoid this problem. Due to their inhibitory effect on adipogenic differentiation, EGF and hydrocortisone were removed from the co-culture media. Because VEGF and hFGF-B have been shown to promote cell outgrowth, they were removed from the co-culture media. Because of their pro-adipogenic properties, insulin, T3, dexamethasone, rosiglitazone, and forskolin were added to the co-culture media. Within a microfluidic device, this modified condition was used to develop vascularized adipose tissue. For evaluating new therapies for obesity and metabolic disease, the vascularized human adipose tissue model could be used instead of animal testing. 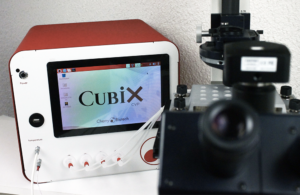